If you haven’t flipped on CNBC (or any media outlets) in the past couple of days, a number of Wall Street hedge funds took out short positions on adrift retail stocks like GameStop. Enterprising reddit users on a subreddit called r/WallStreetBets discovered the short positioned through required public disclosures, and then banded together to drive the hedge funds into underwater positions by buying up the stock’s price.

So, suddenly, Gamestop was trading at around a whopping $469 per share at one point -- up from the $17 ticker price from the start of the year, despite no real positive news about the company’s fundamentals to drive it. (Watch this full explainer video from Vox.) Gamestop Going Viral - Then Freezing

Now, the whole phenomenon has spread to far more than some obscure subreddit. The original r/WSB broke Reddit traffic records yesterday, prominent activist investor Chamath Palihapitiya is now in on the game, and noted stock moving-tweeter Elon Musk acknowledged it yesterday. In other words, we’ve long-since broken containment to some weird corner of the internet. Chances are someone in your rolodex picked up a stock like Gamestop, Blackberry, AMC Theaters, or Nokia in the past couple days, despite maybe having little at play in the stock market prior to Monday.

We won’t dive into the moral rights or wrongs of this here; you can find plenty of commentary on hedge funds elsewhere on the internet today. But there’s no doubt this Reddit-fueled run has caused some larger market instability and scrutiny. Giant hedge funds are taking massive losses, random inexperienced investors are taking home massive sums, and market circuit breakers for volatility that halt trading for certain stocks are being triggered multiple times per day. This, of course, draws attention from the SEC, and in turn has led the trading platforms to put a freeze on some of these stocks.

As it stands right now, apps like Robinhood have frozen Gamestop, Blackberry, AMC Theaters, and a handful of other stocks from further buys. Users can still hold & sell the stock, but they’re unable to buy more, temporarily locking-up the online monolith attempting to drive up the stock’s value even further. It means the run of fun is over for many, and with many individuals that bought into the GameStop crazy over the past 24-48 hours could hold massive losses as the stock falls back to earth.

That means, as you can imagine, angry people, asking a question we know well here at PactSafe: Is this even legal? Do Robinhood’s Terms of Service even allow for this?

Answer: Probably, if they could enforce them.

Robinhood’s Terms of Service Don’t Reserve a Right to Freeze Trading, But Their Customer Agreement Does.

Any time a tech company or app comes under scrutiny, the default reaction is to look to the Terms of Service to note if an action was allowable. But, keep in mind Robinhood is effectively acting as a tech-enabled broker. The Services themselves often just refer to the app. Here, with a stock being frozen, we need to look to the actual Customer Agreement between you and Robinhood Financial & Robinhood Securities.

This agreement has most of the language you’d typically expect in one of these agreements -- typical warranties and liability limitations that limit Robinhood’s liability, as well as language and disclaimers on market volatility. But we’ll point to Section 16 of the customer agreement for the provision that likely allows Robinhood to freeze trading:

“...I understand that Robinhood may, in its discretion, prohibit or restrict the trading of securities, or the substitution of securities, in any of My Accounts. I understand that Robinhood may execute all orders by Me on any exchange or market, unless I specifically instruct Robinhood to the contrary. In the event of a breach or default by Me under this Agreement, Robinhood shall have all rights and remedies available to a secured creditor under all applicable laws and in addition to the rights and remedies provided herein. I understand that Robinhood may at any time, at its sole discretion and without prior notice to Me: (i) prohibit or restrict My access to the use of the App or the Website or related services and My ability to trade, (ii) refuse to accept any of My transactions, (iii) refuse to execute any of My transactions, or (iv) terminate My Account….”

Okay, that’s pretty clear. Robinhood’s customer agreement - which was updated less than 30 days ago - provides them the ability to basically not accept any trade request from you, at their sole discretion. This is actually relatively common language for any sort of brokerage service you might be using -- and why services like TD Ameritrade took the same action as Robinhood.

Okay, there’s a provision that allows this. But is the agreement enforceable?

As we discuss often here at PactSafe, courts need to make sure customers were given a clear, material opportunity to review and understand the terms that were put in front of them -- as well as track back end records to prove the individual user agreed to the terms & screenshots or replications that prove what the user actually saw in the enrollment flow.

We can’t know if Robinhood is following our best practices behind the scenes on what needs to be tracked from a data perspective, we’re only able to inspect the user experience of creating an account and being prompted to review the terms.

On an account creation screen, here’s what a user sees when being put on notice that the Cardholder Agreement exists. 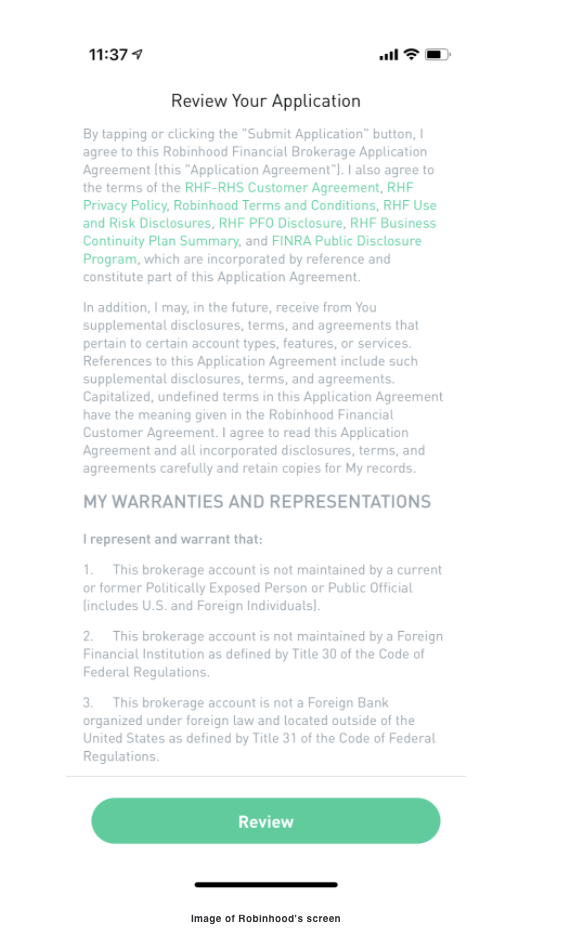 A couple items worth noting here.

One, some court decisions about agreement enforceability have disfavored this concept of dumping several different agreements referenced into one single click action, especially when there are other confusing UI elements. We’ll call that concept “nesting.”

To access the operative provision that allows Robinhood to halt trading, I’d need to click into the RHF-RHS Customer Agreement, scroll down several pages, and then read legalese to understand that this could occur. This does give a user an opportunity to review, which has been the generally accepted standard -- but not an easy to access one. Oh, and some lawyer at Robinhood should talk to their UI team about font color. Trying to use light colored font like this on a white screen is very similar to what led to having Uber’s arbitration agreement invalidated in the First Circuit. (Also, check out our blog on effective screen design.)

The next tricky concept here? The ‘REVIEW’ button. Tapping the review button doesn’t actually let you review any of the agreement, but it forces a light-speed scroll of the entire screen. This likely lets Robinhood show that you scrolled the agreement, sure. But only if you can read words at about the rate of, say, one million per minute, that button turns into a ‘Submit Application’ Button to confirm the enrollment action. This clickwrap construction is more clear than the initial element, but still is rather muddled and requires many clicks and scrolls to find the relevant term here. 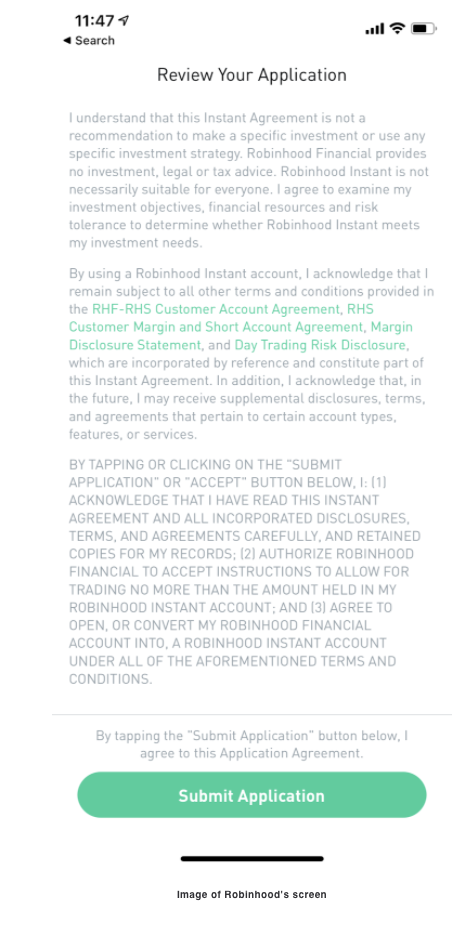 Are the Agreements Enforceable?

So, yes. Most past federal circuit court holdings would find these terms to be enforceable as constructed. These agreements are usually enforced when an entire screen/part of the process is designated to terms review and acceptance like Robinhood's is (Uber just won on similar grounds - see here and here).

However, the unnecessary clicks and scrolling required to get to a material provision opens the window for a judge that’s looking for a reason to reverse engineer a decision favored by public opinion to find a reason to throw the agreement out.

Lesson for UI designers: Don’t get cute around clickwraps. Ethical design and disclosure that gives users an ample opportunity to review is more important than matching your brand guidelines and a perfect conversion flow.

Terms of Service Aren’t Everything - But They're A Lot

Robinhood isn’t just any app, and this isn’t like Twitter banning random users. Financial brokerage services have regulatory requirements that supersede a private contractual relationship. Enter the SEC, that already hit Robinhood for practices they deemed predatory last month around buy/sell execution quality -- depriving customers of around 34.1 million in a period between 2018 and 2019. In that enforcement decision, the SEC explicitly noted that Robinhood has a duty to protect customers.

This is an event unlike anything we’ve ever seen. Although the SEC will want to favor policy that doesn’t undermine market fundamentals, would a pro-consumer SEC under the Biden administration seek to penalize a brokerage app that allowed consumers to trade to their heart’s content right up until the point they could no longer control their own destiny? Maybe! Who knows! That’s why this is a blog about clickwrap agreements and terms of service, not SEC regulations.

Read more about the enforceability of online agreements:

This article was originally published here on January 28, 2021.

Kyle Robbins is a former practicing attorney and current Vice President of Sales at PactSafe, where he is the senior leader of PactSafe's revenue organization, presiding over sales team, sales execution, and go-to-market strategy.

Teranga: The Senegalese Word That Guides This Lawyer’s Leadership

“Find Your Calling”: How This Lawyer Leveraged a Love of Beer Into a Successful Career