In most companies, both managers and employees dread the annual review process, and law firms are no exception. This was also true at Lawline, until we pushed the company to implement a new Performance Management Process based on weekly coaching sessions and bi-annual reviews, removed compensation conversations from performance-based reviews, and created a profit share plan based on the company’s financial results. By sticking to this system, Lawline has seen employee satisfaction rise - a crucial ingredient in helping the company grow, and one with which many law firms struggle.

During the first eight years of the business, like most new companies, we had one review per year at the end of December, and no formal coaching program. In the yearly review, a manager would provide feedback on an employee’s self-evaluation of their performance as well as discuss annual raises and whether or not a bonus would be paid for the prior year. The conversation would often be a “gut check” for the manager, as there was no formal tracking of metrics or ongoing feedback. At times, employees were unsettled after receiving critical comments for the very first time.

This issue went out the door once we implemented weekly coaching sessions between every manager and their direct reports, which provide an employee with consistent feedback throughout. In these one-on-one meetings, employees and their managers discuss what they did in the prior week to support the KPIs in their job scorecards, and what progress they have made on their quarterly priorities. These conversations focus on what the employee views as their biggest accomplishment of the week and what they struggled with.

There was still a disconnect, however, between the weekly coaching discussions and the end-of-the-year reviews that were focused on potential salary changes and bonuses. In order to address this inconsistency, we completely eliminated the end-of-the-year compensation review. Instead, we created bi-annual reviews in the Fall and Spring. The Fall review is more formal, focused on how well the employee is doing with respect to their job scorecard, KPIs, and competencies. At the less formal Spring review, the manager learns about pain points for the employee, and makes any necessary adjustments to their role’s accountabilities. With this system, the substantive Fall reviews are devoid of surprises because they are built on conversations that are already occurring throughout the year. In a departure from most performance review systems, neither review discusses compensation, only performance.

The problem with tying compensation to the performance review process is that substantive feedback on performance becomes secondary to resolving issues of compensation. By severing these two processes, the question of performance and compensation were able to be fully, and fairly, addressed in their respective meetings. We moved the compensation review to the employee’s hiring anniversary, making it an annual conversation based on tenure. When we first implemented this change, we did a market analysis of salaries for every position in the company, and raised all salaries to the fair market rate for their position. Finally, we created an across-the-board policy that future raises would be given if there had been a change in the market for the salary of an employee’s position, or in the event that an employee’s job duties had expanded.

3.          Implement a Profit Share Plan Based on Company Performance

One of the critical aspects of a good employee policy is that it be seen as fair. Lawline’s previous system of 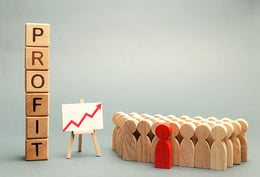 bonuses was stressful for managers, who struggled with determining how much of a bonus a team member should receive, and opaque for employees, who were not clear how their bonus totals were determined. Additionally, although most employees had a good understanding of our end-of-year revenue numbers, they had no connection to our profit, and how that is calculated based on annual expenditures. To address these issues, we created a profit share plan in which each employee would receive a specific percentage of the company’s annual profit, as long as the company had met a minimum net profit threshold and the employee had been employed for at least three months.

These three simple steps revitalized Lawline’s Performance Review Process, and can easily be implemented at small and large law firms alike. As a result of our new procedures, we have increased our employee retention rate, have more team members who are taking leadership roles, and in 2018, we reached the highest revenue and profit in our company’s history.

If you would like to learn more about Lawline’s Performance Review Process or any of Lawline’s Best Practices for Employee Retention, feel free to reach out to Michele, Lawline General Counsel and VP of Business Operations, at Michele@lawline.com. To learn more about the legalities of performance management, check out A Practical Guide to Hiring, Performance Management, and Termination of Employees.

As Lawline's VP of Business Operations, Michele helps Lawline recruit and retain A players, and works to create an engaging, vibrant, collaborative work environment for Lawliners and the other like minded companies who share its open tech work space. Michele recently completed her first triathlon with Team Triumph, a women's only tri-group and looks forward to her next competition.

How Can Lawyers Support Clients Who Are Not English-Proficient?